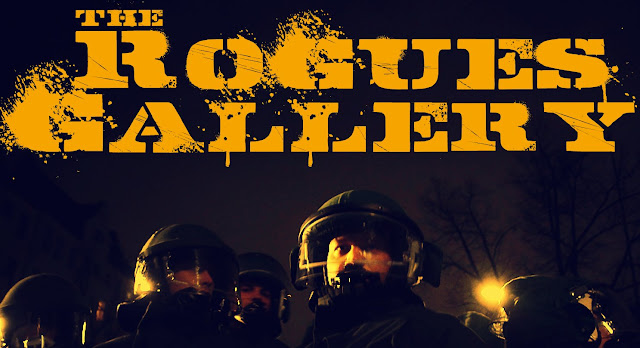 Think you've got what it takes to go Rogue?  Then submit.
(Submissions are currently closed. Re-opening soon.)
#5 - Sofia Essen: Her passport claims she is Swedish even though she left the country more than two decades ago and hasn’t returned since. She now lives in Crete where she has watched fellow expats tirade against seemingly endless amounts of bureaucratic red tape to comical results. Some people fail to understand things don’t work in Crete in the exact same way they do back home, wherever that might be. So Sofia is often tempted to tell the highly strung foreigners she encounters to relax and take a deep breath. She knows that if you want to live on a Greek island and enjoy it, you have to learn to adjust to the pace of the island… she thought there was a story in there somewhere, and then she wrote it. This story was published in April 2012 and it’s titled Change of Pace.
View her submission 'Change of Pace'

#4 - Sarah Allen:  Sarah is a fan-girl and uber-dork working on submitting her first novel and drafting her second. She memorized The Cat in the Hat at age three and has loved reading ever since, which made graduating in English an easy decision. She writes short stories and poetry as well and has been published in several literary magazines such as The Tipton Poetry Journal, Atlas Poetica and Boston Literary Magazine. She is a social media nerd and blogs at http://fromsarahwithjoy.blogspot.com/. She is a slytherpuff, anglophile and Jane Austen groupie. She is a sevret lover of jazz and post-grunge rock, and a not so secret lover of Colin Firth, white chocolate, cavalier king charles spaniels and Frasier.
View her submission 'Lunatic'
#3 - Jennifer Word.  When Jennifer was ten, her 4th grade class received an assignment to write a short story. She wrote hers and turned it in. A few days later, she was called to the teacher's desk while everyone else was excused to recess. She wondered if she had done something wrong and thought she might be in trouble. Her teacher held her story up and told her it was exceptional. Then she looked at her and simply said, "Did you know that you are a writer?" Right then and there, a dream was born for Jennifer. Twenty-five years later, Jennifer is pursuing her dream with an intense passion. She has written six novels, nine novellas, 20 short stories, three flash fiction pieces, over 50 poems, and two screenplays. Three of her novels, in the form of a trilogy series, have been contracted for publication with Stony Meadow Publishing. Book one of The Society is due out in the winter of 2012. She has had short stories published in The Storyteller Magazine, Dark Moon Digest and Dark Eclipse. She writes a blog at www.fictionspook.com, covering her forays into the publishing world, her travails and experiences. She also occasionally features her stories and poetry. She is currently doing preliminary work for publishing some of her novellas in eBook format.
View her submission 'The Monster Across the Street'
#2 - Morgen Bailey.  After enjoying English at school then dabbling with limericks in her 20s, Morgen came back to writing through a local college evening workshop in January 2005. It swiftly became a passion which over the past couple of years has turned into obsession. She has written four and a bit novels, over 100 short stories, a script and a half, some poetry and most recently articles for the NAWG Link magazine. In August 2010 she started the Bailey's Writing Tips weekly podcast then late March 2011 a blog which initially consisted of information she provides to her writing group, and some of her fiction but mid-June 2011 she added daily (which by day 4 became twice-daily) author interviews. She is always looking for writers of any genre published or non-published to take part and can be contacted via morgen@morgenbailey.com and her blog is http://moregenbailey.wordpress.com.
View her submission 'Threadbare Girl'
#1 - Neal James.  Neal James is a British author, and has authored over 100 short stories. He is 58 and lives in Derbyshire. His debut novel, 'A Ticket to Tewkesbury', was published by Pneuma Springs in 2008. It was followed in 2009 by his first anthology, 'Short Stories Volume One', and in 2010 by the crime thriller 'Two Little Dicky Birds', the artwork for which was produced by Onxy Dragon Productions LLC. This year will see the release of 'Threads of Deceit', a further excursion into the world of crime.

A full coverage of all his work can be seen on his website www.nealjames.webs.com
View his submission 'Marks on the Wall'
Email Post