Cass Morrison and the Package from Saron (short story and opportunity)

on March 30, 2020
I've reactivated my Fiverr gig, the I Will Kill you for $5 project. And two victims were eager to join us at the slaughter. I mean... I have two new customers. That also means my lucky readers have two new short stories incoming to read.
First things up first... the download link is here (the story is available in PDF, epub, and mobi). Take it where you want to read; computer, phone, eReader, tablet, etc. Otherwise, you can scroll down and read it directly in this blog post as well. 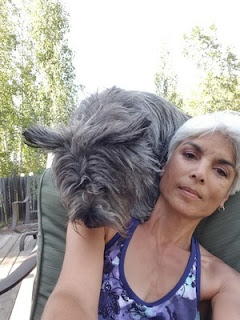 The above image is of the real Cass Morrison and her pup, Bennie. She had made a jest about possibly including Bennie in the space opera she had asked me to write, and well, I couldn't resist playing with that idea. Cass and Bennie are both present in the story. I've worked with Cass (and others) on a daily check-in we do on Pluspora.com, and she is a wonderful person. It was exciting to get her order.
But, no more fluff, let's get to the good stuff. Enjoy the reading, and sound off in the comments when you're done to let me know what you thought.

Cass Morrison and the Package from Saron

Here we go again. Another victim has signed up to be terminated. So I have obliged.  First things first-- here is the sweet, sweet download link (epub, mobi, and pdf formats) .  The real Kirsten Little In an interesting turn of events, Kirsten chose "heist" for a genre. That's not one of my options I give when people sign up, but it sounded too fun not to try. She also asked to be the antagonist in the story. One of only two to make the antagonist request, as I recall. I've known Kirsten for a few years now, not sure how many, she's married to a very old friend of mine ( and previous victim here ). She's a music teacher, and so I tried to sprinkle a lot of music throughout the story. Almost every scene in the story is accented by a vinyl spinning in the background, a boombox playing, a radio, a tape cassette. And if you're wondering why not CDs or Spotify? Because this heist takes place in 1987. But enough about all that. Let's get to reading. Hope you

Another victim signed up late last Saturday for the I Will Kill you for $5 project. So, of course, I had to oblige.  First things first, here is the link to download the files for the story (they're available in epub, mobi, and PDF) . Take your pick and take it with you. Or take them all, I'm not watching.  The real James Cowie. I don't know the gentleman, James Cowie. Not sure how he heard about or stumbled on the project, but what could I do? Kill 'em. That's what. James requested a crime tale, and to be the protagonist. And as I looked at the above selfie he sent me, I knew I had something to work with. I looked around and zoomed in on the photo. The docks. Boats. An older gent with a white beard, classy. I really had something to work with, I felt. And so my creative juices went to work.  But enough introductory stuff, let's get to the story! I hope you enjoy, James, and everyone else too. James Cowie and the Case of the Midnight Job Former homicide detect