All writers are learning, mind your manners 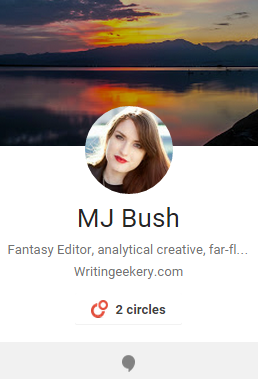 Yes, there are rules. But if I learned anything worthwhile from reading Fight Club by Chuck Palahniuk, aside from all the horrible things, it's that the rules of writing were made to be broken. I have never read a book in first person perspective that sounded so much like dialogue, as if Edward Norton was in the room narrating a story. When you listen to the voiced over parts of the Fight Club film and compare them with the same narrative in the book, it's the same. That was sort of a mind blowing moment for me in my writing, and that was in high school many years ago. Granted it would take many years later before I could consider any of my work decent, and in a few years I'll consider my current work drivel I'm sure of it. But the point is this...

We are all learning

So, thanks to MJ today! I'm so glad she won the Internet, and that the Google+ algorithms worked in my favor and fed me that post.
Labels: 🖇 Links Link writing
Reactions:

Here is order number two for today in the I Will Kill you for $5 project. If you like the stories you read, don't hesitate to join them in the depths of the abyss. I mean, er, order a short story... yeah. First up, the download link is available here (story is in PDF, epub, and mobi formats) . So you can take them wherever you read things: computers, tablets, eReaders, phones, refrigerators. I won't judge. Harshly. It is also available below in this post. Above is the real-deal Elizabeth Hahn, or so the Internet has told me. I first met Elizabeth on Google+ somehow, I can't recall how, maybe she can remind me in the comments. She turned into one of my few and lovely beta readers for my first book Sweet Sixteen Killer -- which she has been waiting for me to publish very patiently since reading the early version. When setting up her order, this was her answer regarding the genre, "SciFi, campy SciFi, Old school mystery a la Agatha Christie or Sir Arthur Conan Doyle."

Here we go again. Another victim has signed up to be terminated. So I have obliged.  First things first-- here is the sweet, sweet download link (epub, mobi, and pdf formats) .  The real Kirsten Little In an interesting turn of events, Kirsten chose "heist" for a genre. That's not one of my options I give when people sign up, but it sounded too fun not to try. She also asked to be the antagonist in the story. One of only two to make the antagonist request, as I recall. I've known Kirsten for a few years now, not sure how many, she's married to a very old friend of mine ( and previous victim here ). She's a music teacher, and so I tried to sprinkle a lot of music throughout the story. Almost every scene in the story is accented by a vinyl spinning in the background, a boombox playing, a radio, a tape cassette. And if you're wondering why not CDs or Spotify? Because this heist takes place in 1987. But enough about all that. Let's get to reading. Hope you