To Infinity and Backwards!

December 31, 2012
An update is long overdue, as are some originals.

Decided to rock NaNoWriMo this year, and it was a beast. I didn't complete my novelization of CAFE DE MORT in November, but I did complete a lot of it and revitalized some of it. Discovered about halfway through the month that it needed more meat, my original outline just wasn't cutting it. I have no doubts I'll finish CAFE DE MORT, I'm super confident in it.

Another serious decision I made about CAFE DE MORT was regarding its lead character, George Lamarck. I had been working on a serious of other stories with a character named Graham Michaels or Michaelson. His first appearance was in my short story UNDERDOGS. At some point during November, I realized George and Graham were just too much alike not to be the same character. And doing something that's worked well for me in the past, and I highly recommend to all authors, I decided to combine the two concepts. So CAFE DE MORT will be the first in a serious of short novels with George/Graham, and he also appears in my HARDBOIL HIGH series, which is where UNDERDOGS comes from (it's a short story version of a subplot in the series).

I try not to keep myself on a schedule with Rogues Gallery, as I'm sure I would fail to keep up on it. That being said, I've had a piece from +Pavarti K Tyler that I've needed to read and consider for submission #6 and I just haven't had time to do so with NaNoWriMo, surgery and a host of other excuses getting in the way... including a failed coup by the Mayans. Hopefully within the next few weeks, we'll see hers come around... barring it gets past my filters (mer?). And new authors are always welcome to submit works. 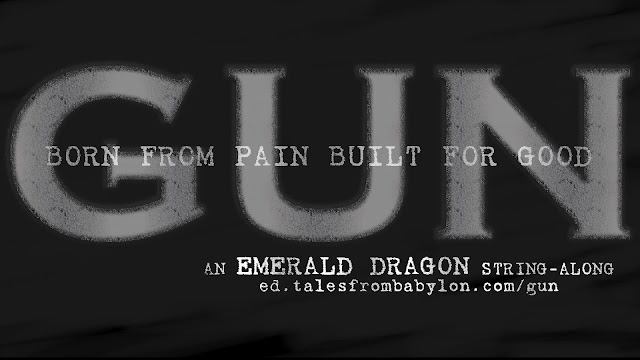 On a super exciting note, that I haven't written about here yet, the second String-Along story is entering phase 2 of it's journey to magnificent mayhem. Our first String-Along was FATAL FLAWS, which turned out beautifully, utilizing 5 authors in a rotation method for writing the short novel.

Second time around we upped the ante a little, going from five authors to thirteen. In the end, only three couldn't deliver for various personal reasons, but the result is fantastic. We have a pretty spirited effort, and we're eager to have it polished and ready for public consumption. For now, you can read the Prologue here.

My Dystopian Flicks for January

Disclaimer: These Amazon links are ads.